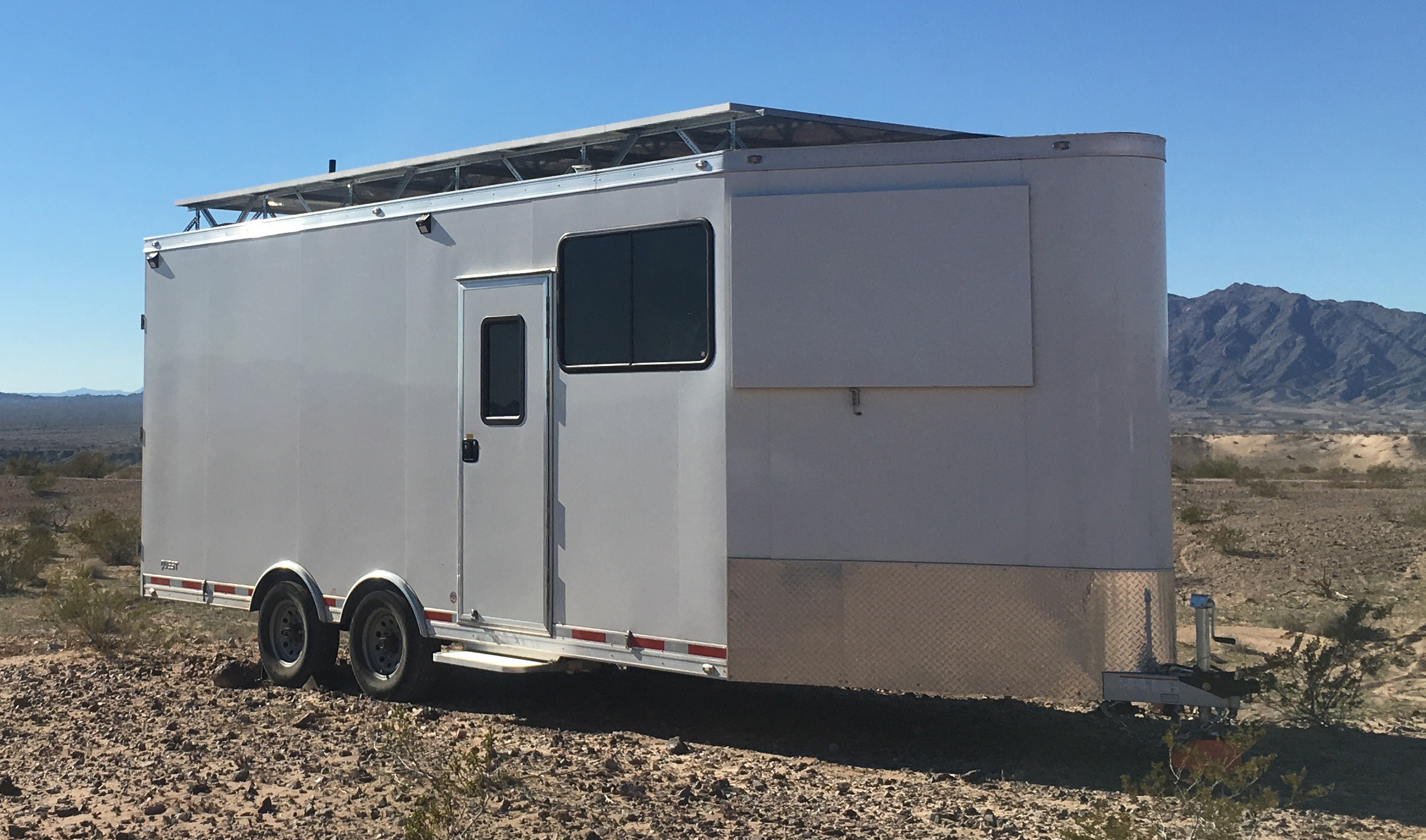 I started on a quest to build my own rig a few years ago. After researching the RV industry extensively, I was finding the only units that I would consider living in were well out of my price range by about a lottery-winning’s worth of money. Even then, they still didn’t have everything I was looking for. So, I decided to build my own.

The plans and designs of the trailer changed many times over the design and build process. Once I was somewhat decided on a size and shape, I worked with a company that built custom trailers to create mine. We went through a few iterations of blueprint mockups before all parties agreed and signed off on the construction of the trailer. Their job was to build me a large, solid, metal box on wheels. My job was to do everything else.

Shortly after purchasing the trailer, I was running low on funds, and because I wanted to build it debt-free, and I wanted to get some actual RV’ing experience before building out the entire rig, I decided to pick up a truck camper and run around in it for a while. It was a great learning experience, and it helped influence some of the decisions I made in the final build-out.

I seriously got to work on the trailer build in April, 2018. By July 6th, 2018, I had my ceremonial launch of the AFE (Awesomest Fort Ever). It was a grueling construction timetable, but I’m really happy I got it done and launched before the Texas heat I was doing the construction in got any worse.

One of my goals in the design of the AFE was to not have propane. To accomplish this, an excessive amount of battery and solar power was required. I wanted to have a 30kwh battery system, but due to the cost of lithium batteries, I was only able to afford the minimum spec that my rig demanded, a 9.6kwh system (with 80% usable, so that came out to 7680watt-hours). By my calculations, that was sufficient to run the heat pump all night (with obviously no solar coming in) in below-freezing conditions.

Speaking of no-propane and heat pumps, I installed a 48-volt DC air conditioner / heat pump. This, in theory, would allow me to have both heat and air conditioning, as needed, without the need to have propane or run a generator. More on that later.

To charge the batteries and run the whole system, I installed 2,130 watts of solar. (6) 355-watt solar panels were wired together in series-parallel connections to produce the voltage required to power my 48-volt lithium battery bank. These solar panels have worked beautifully over the past year+ that the AFE has been on the road and it’s amazing to me how much power they continue to generate, every single day. Even on cloudy days, I almost never have to worry about how much power is coming on, or how much power I’m using. If there’s one piece of advice I could give everyone that wants to go off-grid it’s this: there’s no such thing as “too much solar.”

The AFE has been running all over the country in the past year, from east Texas to Minnesota, to Oregon, down into Arizona, up through Utah and Montana and into Alberta, Canada. Recently we even did a whirlwind tour from Alberta to Colorado to Minnesota and back in just over a month. The AFE certainly gets a lot of miles put on her.

With all of this travel and various conditions, I’m very happy to say that I’ve never once had an electrical problem in the AFE. Its electrical systems have been 100% reliable and always worked like they should. The only major problems I have had is with the heat pump and it’s unreliability in heating mode. Unfortunately, that’s a manufacturer’s design issue, and as such, I won’t be recommending that brand to anyone. If you are interested in getting a heat pump in your rig, I’d recommend a slightly-less-efficient but much more popular Mitsubishi or similar unit.

The AFE is continuing to change as time goes on. This winter I’ll be converting her from a “bumper-pull” type of trailer to a gooseneck trailer. This will afford me much better safety and stability when towing. It’s going to be a major welding and fabrication job, and I’ve enlisted a friend that is very experienced at these kinds of projects to do the work for me this winter. Along with the conversion, I’ll be adding dual front electric jacks, various truck-storage boxes, and an upgraded 48v to 12v conversion system to handle the increased power requirements of those electric jacks. I’m really excited about this upgrade and will share the details when that upgrade comes through.